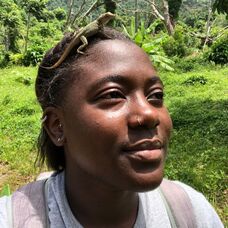 Chelsea Connor is a herpetologist focusing on anoles at university in Texas. She's studying the interactions between an invasive species, Anolis cristatellus (Crested anole), and an endemic species, Anolis oculatus (Eyed anole), on the Commonwealth of Dominica where she's from. Chelsea is also a science communicator who loves sharing fun facts about anoles on her Twitter page with #DidYouAnole.
​ 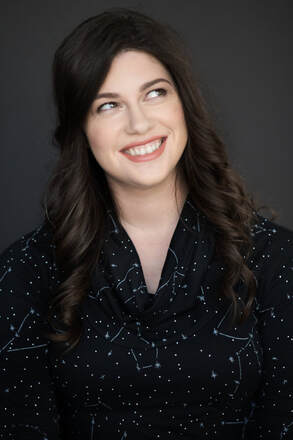 ​Janelle Shane's AI humor blog, AIweirdness.com, looks at the strange side of artificial intelligence. She has been featured on the main TED stage, in the New York Times, The Atlantic, WIRED, Popular Science, All Things Considered, Science Friday, and Marketplace. Her book, "You Look Like a Thing and I Love You: How AI Works, Thinks, and Why It’s Making the World a Weirder Place" uses cartoons and humorous pop-culture experiments to look inside the minds of the algorithms that run our world, making artificial intelligence and machine learning both accessible and entertaining. Shane is also a research scientist at an optics R&D company, where she has worked on projects including a holographic laser tweezers module for the space station, and a virtual reality arena for mantis shrimp.

The Lepers in the Lab: Human Skeletons from an Early Christian Cemetery in Thebes, Greece with Maria A. Liston
Monday Oct. 12,  Noon EST

This webinar presents evidence for the late Roman/early Byzantine leprosy epidemic that affected Thebes, and probably a much wider area of Greece. It  also will look at individuals who were buried in two mass graves, suggesting that they died in a catastrophic event, such as an epidemic disease. The Justinianic plague, known to be the first wave of bubonic plague to sweep through Europe, was ravaging the Mediterranean world during the centuries this cemetery was in use.  We anticipate that DNA analysis will identify the disease that killed the individuals in these mass graves, but we know already that many of them also were suffering from leprosy when they died.

Maria Liston received a BA and MA in Classics a BA and PhD in Anthropology from the University of Tennessee.  She is an Associate Professor of Anthropology at the University of Waterloo, ON, and a 2020-2021 Honorary Research Associate in the Malcom H. Wiener Laboratory of Archaeological Sciences at the American School of Classical Studies in Athens.  She is a skeletal biologist and archaeologist, focusing on the excavation and analysis of human remains and their mortuary contexts. She co-authored The Agora Bone Well (2018), a study of a well containing 449 infant and fetal skeletons, probably deposited by midwives working in Hellenistic Athens.  She is currently documenting skeletons from an early Christian cemetery found in in the Sanctuary of Apollo in Thebes. This cemetery was associated with an early hospice or hospital; many of the individuals buried there suffered from leprosy, and two mass graves suggest there were victims of the Plague of Justinian, and she will be talking about this project in the webinar.
​

An internationally renowned archaeologist with more than thirty seasons of excavation experience, Prof. Eric H. Cline has conducted fieldwork from Greece and Crete to Egypt, Israel, and Jordan. Drawing on his forthcoming book, Digging Deeper, Cline answers questions archaeologists are most frequently asked: How do you know where to dig? How are excavations actually done? How do you know how old something is? This lecture will be filled with insights and practical advice about how archaeology really works. The webinar will conclude with a live Q&A session with Prof. Cline.

Dr. Eric H. Cline is Professor of Classics and Anthropology, former Chair of the Department of Classical and Near Eastern Languages and Civilizations, and current Director of the Capitol Archaeological Institute at The George Washington University (GWU), in Washington DC. He is an active field archaeologist, with more than 30 seasons of excavation and survey experience in Israel, Egypt, Jordan, Cyprus, Greece, Crete, and the United States. He is a former co-director at Megiddo (biblical Armageddon), where he dug from 1994 through 2014, and is currently co-directing the excavations at Tel Kabri in northern Israel, site of a 4,000-year-old Canaanite palace, where they have discovered the remains of the oldest and largest wine cellar so far known from the ancient Near East.

Millennium on the Meridian: Tracking the History of the Ancient Southwest with Steve Lekson
Oct. 17 7pm Eastern

Twenty years ago, I suggested that three sequential capitals of the US Southwest -- Chaco, Aztec Ruins, and Casas Grandes -- were deliberately aligned north-south of each other, more-or-less on a meridian. Two decades of new data largely support this reconstruction, and perhaps even extend it backwards and forwards 500 CE to 1500 CE. New archaeological data, new readings of Spanish colonial accounts and Native stories, and new understandings of the Southwest's relationship to the larger continent (Mississippi Valley and Mesoamerica) will be presented and evaluated.

Stephen H. Lekson was Curator of Archaeology at the Museum of Natural History, University of Colorado, Boulder. He received his PhD from the University of New Mexico in 1988, and held research, curatorial, or administrative positions with University of Tennessee, Eastern New Mexico University, National Park Service, Arizona State Museum, Museum of New Mexico, and Crow Canyon Archaeological Center. Lekson directed more than 20 archaeological projects throughout the Southwest. He was Editor of the journal Kiva (2006-2011) and continues as Contributing Editor for Archaeology magazine (2003-present). Lekson's publications include a dozen books, chapters in many edited volumes, and articles in journals and magazines. His most recent books: A History of the Ancient Southwest (2009), Chaco Meridian (2015), and A Study of Southwestern Archaeology (2018). He curated a dozen exhibits, most recently “A History of the Ancient Southwest” (2014) at the CU Museum of Natural History. He retired in 2018.

What can Roman toilets teach us about daily life in ancient Rome? What does the archaeology of these structures reveal about Roman hygiene, public sanitation, customs related to purity or cleanliness? In a talk that investigates and illustrates some key examples of public and private Roman toilets from Rome, Pompeii, Herculaneum, and Ostia, we take a trip down into the black holes of ancient space for some answers.

Ann Olga Koloski-Ostrow has done archaeological fieldwork in Italy at Herculaneum, Pompeii, Ostia, and Rome, and in Jordan, Tunisia, and survey work or archaeological study in Croatia, Cyprus, Egypt, Israel, Lebanon, Libya, and Turkey.  She works especially on Roman daily life, including urban infrastructure, plumbing and hydraulics, baths and bathing practices, and toilets and sanitation. At Brandeis University, she is Kevy and Hortense Kaiserman Endowed Chair in the Humanities, Professor of Classical Studies, and Head of the Division of the Humanities. She was the 2016 winner of the Archaeological Institute of America's award for Excellence in Undergraduate Teaching.

Wieteke Holthuijzen is a National Science Foundation Graduate Research Fellow at Northern Illinois University, where she studies the ecological impacts of introduced house mice on Midway through a collaborative research effort with Island Conservation and the U.S. Fish and Wildlife Service. Previously, Wieteke served as the Invasive Plant Control Specialist on Midway, helping to restore the atoll to a bustling seabird colony. She is intrigued by the nexus of nature and human presence and seeks to study and contribute to the conservation of imperiled species. In her spare time, she enjoys playing the cello, ukulele, banjo, and electric bass, and competing in roller derby with her local league (The Barbed Wire Betties).

Caitlin Cunningham is a PhD candidate in Interdisciplinary Studies at Dalhousie University. Her research looks at how cities can be better designed to support wildlife and meet biodiversity conservation goals. She is especially interested in how small spaces, like lawns and roadside verges can be used as wildlife habitat in the city. In her spare time, she is on a mission to find the best climbing tree in Halifax and the best recipe for peanut butter baked goods.

The invisible nature of lakes with Abby Lewis
October 28, 1pm Eastern
Watch her session here: https://us02web.zoom.us/j/83167298401
Abby Lewis is an ecologist who studies the effects of human activities on freshwater lakes. Her research has taken her everywhere from Southern California to Iceland, where she has studied how Los Angeles night lighting changes water quality in unseen ways and how invisible nutrient pollution affects Icelandic flies. Now, at Virginia Tech, Abby is working to help reservoir managers provide safe drinking water while also maintaining healthy lake ecosystems. The key to both of these goals? Invisible gasses in the water at the bottom of the lake.
Twitter: @lewis_lakes

Black in Marine Science
December 3, 1pm Eastern
Watch her session here!
​Jaida Elcock is a graduate student at the University of Washington. Her research focuses on elasmobranch ecology and conservation. She is particularly interested in the movement ecology of migratory elasmobranchs, as this information is still unknown for many species. Jaida received her B.S. in Biology with University Honors from Northern Arizona University in Flagstaff, Arizona. She has been recognized as an American Elasmobranch Society Young Professional Recruitment Fund Scholar and an Honorable Mention for the National Science Foundation's Graduate Research Fellowship Program. Jaida is a science communicator through social media and enjoys doing outreach with any age group.
Pictures are attached

You can watch previous sessions on our YouTube channel!